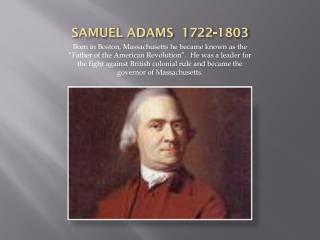 Sons of Liberty - . group of patriots that fought against british taxes and imposition. led by sam adams. taxation of the

The Revolutionary War - . aka: the american revolution or the war of independence. events leading up to the war. stamp

THE AMERICAN REVOLUTION OR WAR FOR INDEPENDENCE - . vs. 13 united states of america great britain. steps to the american

Deborah Sampson - . by hemali. early life. deborah. her mom had to give her away at the age 5. she gave her away to an

The arrival of Samuel de Champlain, the father of New France, on the site of Quebec City - Quebec is a province of