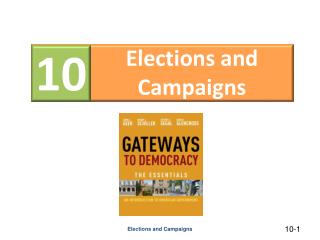 10- 1. Elections and Campaigns. What are the Constitutional requirements for elections? Election rules were left up to the states. Only the House was directly elected by the people. Senators were selected by state legislatures. The President was selected by the Electoral College.

10- 1 - . housekeeping items. outlines due today. our time slot does not permit a field trip, but if you ever get a

10-1 - Estimating and finding area. 10-1. course 1. warm up. problem of the day. lesson presentation. estimating and

1-10 - Equations and their solutions. 1-10. course 2. warm up. problem of the day. lesson presentation. equations and

10-1 Circles and Circumference - . circle. the locus of all points in a plane equidistant from a given point called the