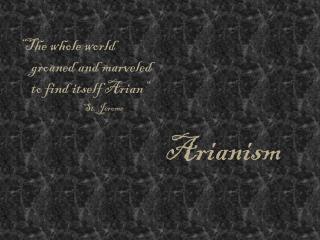 “The whole world groaned and marveled to find itself Arian” St. Jerome Arianism. “The whole world groaned and marveled to find itself Arian” St. Jerome. Arianism. Arius a priest who reflecting on Jesus’ statement that “the Father is greater than I” concluded: Christ, while not God, is an exceptional creature Raised to be “Son of God” because of His holiness

“The whole world groaned and marveled to find itself Arian” St. Jerome

. Musica: -Ave Maria de Maria Callas - Another world if i find in m y self a desire that no one experience of the world

I’ll Never Find Another You - . the seekers. there's a new world somewhere they call the promised land and i'll be

Find your inspiration Discover the world with EF - . costa rica: a touch of the tropics. educational objectives. to

Semi-Arianism - . when constans died (350), and his semi-arian brother was left supreme, the persecution of athanasius