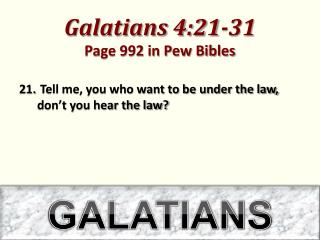 Galatians 4:21-31 Page 992 in Pew Bibles. Tell me, you who want to be under the law, don’t you hear the law?. GALATIANS. For it is written that Abraham had two sons, one by a slave and the other by a free woman. Copywriting Tips for the Three Most Important Pages on Your Website - Your home page, landing page, and about page are

The Epistle to the Galatians “Freedom in Christ” - . book of galatians in the new testament. time period in nt

Day 3 - . hiv/aids –part i. homework review . self care contract page 33 &amp; which self-care activity did you do

Can We Trust Our Bibles? - . a review and critique of a &amp; e’s documentary, who wrote the bible?. introduction.

One-Page Designs - Note: please turn on the notes view to see the spoken portion of this presentation. one-page designs.

SDS-PAGE - . sds-page purposes. to separate protein molecules on the basis of molecular weight may then be

GALATIANS 3 - Danger. the road ahead. galatians 3. galatians 3 the story so far. paul and barnabas had seen jew/gentile