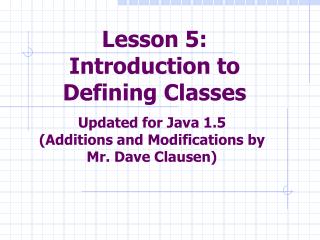 Defining Classes I - . part a. class definitions. oop is the dominant programming methodology in use today. classes are

Week 5 : Defining Classes and Methods - . review. loop statements while do-while for. objective. learn how to define

Introduction To Classes - . session 4. review. a java program consists of a set of classes. the java program must have a

Introduction to the SNA, advanced Lesson 5 - . government. background. government units are different from those in other