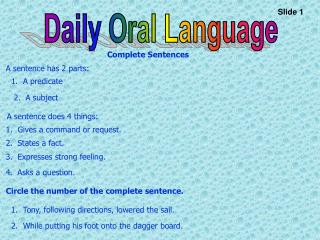 Slide 1. Daily Oral Language. Complete Sentences. A sentence has 2 parts:. A predicate. 2. A subject. A sentence does 4 things:. Gives a command or request. 2. States a fact. 3. Expresses strong feeling. 4. Asks a question. Circle the number of the complete sentence. Visual Language - Being heard by being seen ron bergquist introduction is “who gets heard?” a function of who is

Metodi i pristupi u nastavi engleskog jezika - . week 0 2. approach, method and technique in language learning an

Daily Language Review - . using context clues:  (5 min) you can understand the meaning of words by understanding the