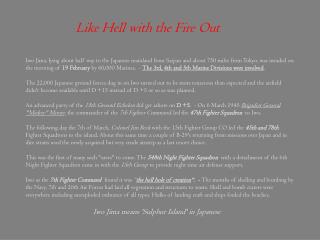 Like Hell with the Fire Out. Iwo Jima, lying about half way to the Japanese mainland from Saipan and about 750 miles from Tokyo, was invaded on the morning of 19 February by 60,000 Marines. - The 3rd, 4th and 5th Marine Divisions were involved . Hell Fire - . a biblical defense of a loving god and eternal hell. hell and modern culture. surveys show that many people

Put out the fire - . by: nick kelly. why firefighting?. my uncle was a firefighter i look up too him he is my hero

The Buddhist Hell - . with discussions on: -the wheel of life -buddhist gods -buddhist ghosts -intricacies of the

Have you done anything bad enough to deserve eternal punishment in hell? - The punishment should fit the crime. the

Hell Fire - . “he shall be tormented with fire and brimstone … the smoke of their torment ascendeth up for ever and