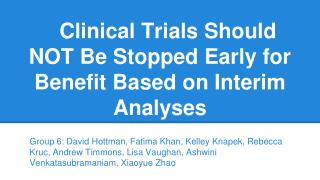 Clinical Study Report - . sita iyer. what is report. it is a document that summarizes all the incidences and facts that

Interim Analysis - Discussion topic #8 should trials be continued if: the results for the primary endpoint are

Interim Analyses of Clinical Trials - . a requirement. outline. background and how dsmbs arose and function group