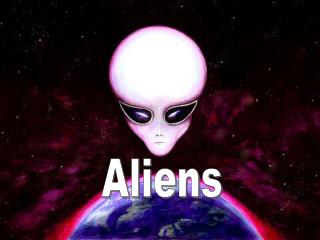 Aliens. Earth is the only known planet to support life. Do you think there are other living things somewhere in Space besides Earth?. Some people believe there are Aliens. Aliens are living beings that are not from Earth. People do not know what they look like, so they use their imagination. Good Morning! Thank you for having me in your classroom today. Mrs. LaRosa www.middleschoolscience.com - . how can we

Immigration and Arizona’s SB 1070 - . by robert ramirez. the goals of sb 1070. create criminal offenses for illegal

Look, but don't touch Why extraterrestrials (probably) haven't been here - Debate whether or not the evidence indicates

What is art? - . dr tan wee hoe. prologue. imagine one day we are visited by friendly, curious and highly intelligent

The Monsters Are Due on Maple Street - . who are the real monsters?!?. who believes in aliens?. 60% of people believe

ALIEN INVASION - . causing changes all over the city!. your task. you are reporters and aliens have invaded the city.

Aliens and Animals - . your assignment…. a side step: totally believable

Aliens - . name. a henrytudor.co.uk production. how to make a mask. look at all the shapes and see the example. choose

The Scientific Method for Aliens - . by: jacob, natalie, and michelle. we come in peace…. what is it?. problem

Escaping The Aliens - . there was once a group of space-men who were on a mission to search for hidden planets. witch

The Serious Take on Alien Sightings - . aliens in history aliens or animals aliens and medicine aliens in court system

Aliens Among Us - . invasive species and their influence on our world. a lesson from the mathematics &amp; science