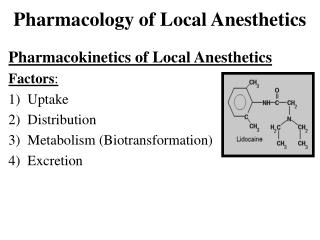 Pharmacology of Local Anesthetics. Pharmacokinetics of Local Anesthetics Factors : 1) Uptake 2) Distribution 3) Metabolism (Biotransformation) 4) Excretion. Most drugs must enter the circulation to attain therapeutic blood levels before they can exert their clinical action

What is Pharmacology? - . name of faculty member responsible for the course: dr.amirabadr dr.najlaaal.orabi

Local and General Anesthetics - . by sarah e. this is all questions!. this covers the bulk of the stuff we have to know

Pharmacology Introduction to Pharmacology - . drugs should be used to prevent, to cure and to diagnose diseases.