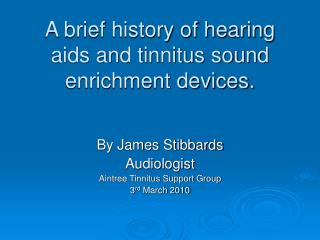 A brief history of hearing aids and tinnitus sound enrichment devices. By James Stibbards Audiologist Aintree Tinnitus Support Group 3 rd March 2010. Early days. The 1 st written account of medical treatment of tinnitus is all the way back to the Egyptians.

Hearing aid - .the most hearing aids to the share several of similar electronic components, including a microphone to

How Hearing Aids Can Help - There is good news. hearing aids help to drastically reduce the energy needed for those

Why donot people get their hearing checked - Hearing disability isn't like turning down the sound on tv.

How Can a Hearing Aid Help with Tinnitus? - In our last blog post, we discussed three things you might not know about

cure for tinnitus 2015 - Http://betinnitusfree.com/the-best-cure-for-tinnitus-of-2015/ - tinnitus is often most

Tinnitus – An ENT Perspective - . mr. marcus choo. introduction . tinnitus is defined as sensations of hearing in the

Tinnitus - Get advice and treatments for tinnitus at art of hearing. please call to discuss the tinnitus treatment that

Hearing Aids - . by christian chipouras. what is a hearing aid?. a hearing aid is a device used to regulate and amplify

What Are BTE Digital Hearing Aids - All the digital hearing aids available in market today, come out with different sorts

https://goldencondor.org/tinnitus-911-does-it-work - Controlling the stress in your life is the most effective way to