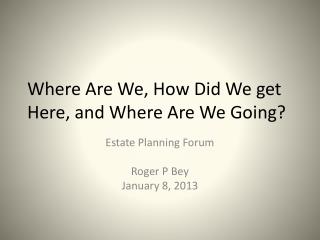 Where Are We, How Did We get Here, and Where Are We Going?. Estate Planning Forum Roger P Bey January 8, 2013. Where Are We. Fiscal Cliff Debt – $16.5 trillion Deficit -- $1.3 trillion Tax Reform Personal income Corporate income Estate Property. Market Conditions