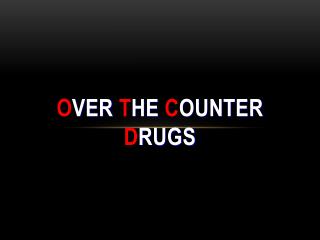 O ver T he C ounter D rugs. OTC Medicines. Drugs/Medicines you can buy without a prescription OTC medicines may relieve aches, pains and itches. Some may prevent or cure diseases, like tooth decay and athlete's foot. Others help manage recurring problems, like migraines or cold symptoms. t he d-dimer - Viral vents his frustration with. t he d-dimer. plan. what the d-dimer actually measures usual

T he C at - . by logan. why do cats make good pets?. fun to play with fury and cozy very lovable. how are they different

T HE A LTERNATIVE T O - . divorce. “i plan to take marriage vows seriously” her life was shattered by parents’