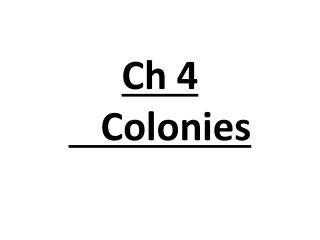 Ch 4 Colonies. region. An area defined by common features or conditions Ex- land – coastal- mountains- plains. climate. The pattern of weather in a place over a long period of time. dissent. To disagree or disagreement. proprietor. Someone who owns land or property. diverse. Ch. 4 - . interactions among organisms. how does competition affect growth, survival and reproduction of organisms?. when

Ch 4 - Prokaryotic. ch 4. functional anatomy of bacteria and other microbes. eukaryotic. or the differences between

Ch. 4 - Ecosystems and energy. ch. 4. levels of biological organization. “eco-” = house the study of the interactions

Ch 4 - . cell structure and function. the cell. the cell is the smallest unit of life that can carry out life processes.

Ch. 4 - . socialization. questions for consideration. which do you feel is more influential in development, nature or

Ch. 4 Sec. 4 - . aquatic ecosystems. nearly three-fourths of the earth’s surface is covered with water. almost all