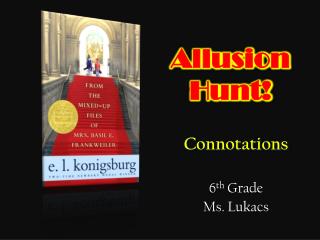 THE FROG AND THE NIGHTINGALE by Vikram Seth - . presentation by kiran tiwari tgt english. the poet. vikram seth was born

Allusions In The Adventures of Mark Twain’s - . a patrick william carey production. don quixote. tom sawyer. is the

The Distant Past - . by: william trevor. summary of the distant

Consonance - . definition- the repetition of similar consonant sounds at the ends of accented syllables. example- the

Allusions English III - . what is an allusion?. a figure of speech a brief reference to a person, place, thing, or idea

Allusions to Ancient Rome in The Hunger Games - . allusion. a reference in a literary work to a person, place, or thing

Considering Allusion - . mrs. michel’s english i class. what is an allusion?. an allusion is a reference to a

The Taming of the Shrew - . literary devices to know. allusion. a figure of speech that make a reference to a specific

Denotations and Connotations - . denotation . connotation. a word’s connotation is the feelings and ideas associated