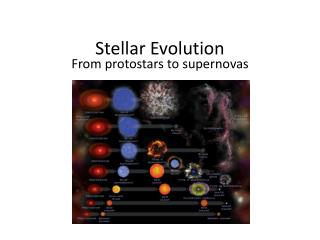 Stellar Evolution. From protostars to supernovas. Protostars. Large nebulas of gas that begin to collapse or contract heat up as atoms interact, causing them to glow. Once an opaque structure forms, it is considered a protostar . Protostar Structure.

The Mean SED and Stellar Mass Density at z&lt;3 - Science questions. what is the evolution in the stellar populations

Stellar Evolution - . arny, chapter 7. introduction. gravity holds a star together while the pressure of its gases