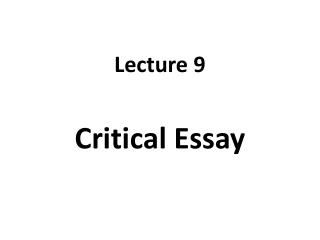 Essay Two - . in this essay you’ll . practice the basic essay structure you learned in essay one; learn how to write

The Letterbox by Ann Marie Di Mambro - . today we will -. see how the themes and issues in the letterbox are explored by

At a Glance: Essays - . chapter 1. the essay and its parts. the essay defined. the essay is a group of paragraphs, each

THE IB EXTENDED ESSAY - . problems of supervision and how to help the student. the extended essay. what is it? how do i

Moving to the Five Paragraph Narrative Essay - . a write on activity. how do you move from the graphic organizer to a

EXAMPLE ESSAY - . characteristics. also known as : illustration essay or illustrative essay not as in drawing or

DEFINITION ESSAY - . the world according to me. “i look &amp; i write my book, and i have my say &amp; i draw