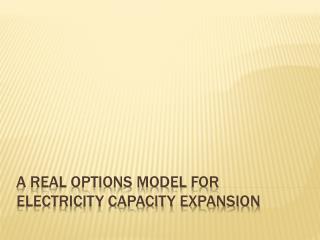 A REAL OPTIONS MODEL fOR Electricity CAPACITY expansion. Christos Nakos , NTUA, Postgraduate Student Optimal Management of the Dynamic Systems of the Economy and the environment THALES RESEARCH WORKSHOP. This presentation mainly follows the developments produced in :

Electricity - . electric charges : the basis of electricity is charge. the charge on an atom is determined by the

Current Electricity - . current electricity – what have we discussed static electricity. properties of conductors

CHAPTER 13 Real Options and Other Topics in Capital Budgeting - What is real option analysis?. real options exist when