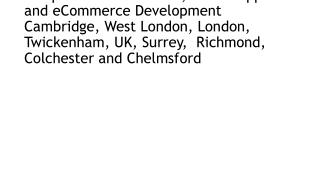 Eastpoint Software Web, Mobile Apps and eCommerce Development Cambridge, West London, London, Twickenham, UK, Surrey, Richmond, Colchester and Chelmsford. See our website www.eastpoint.co.uk for more about our Web, Mobile app and eCommerce development team, or come and see us in Cambridge, UK. Please give us a call on 01223 690164. We work with big and small companies and also have experience as an outsourcing partner, if your company does not have the skills needed in-house. You can email us any app development enquiries at info@eastpoint.co.uk. Mobile Apps developer London - As market demand for apps to run on android, ios and whatever operating system will power

Web Development in London UK - Sowedane.com - We understand your need to adapt to changing technology trends and in