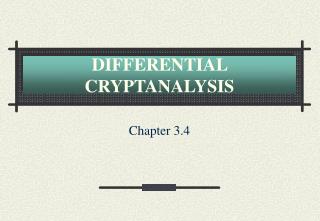 Modern Block Ciphers - . will now look at modern block ciphers one of the most widely used types of cryptographic

Cryptanalysis - . aaron willett. what is cryptology?. cryptography (encryption) the practice and study of techniques for

Chapter 3: Modern Block Ciphers and the Data Encryption Standard - . again special thanks to dr. lawrie brown at the

Cryptanalysis - . with thanks to professor sheridan houghten. example 1.11: ciphertext obtained from a substitution