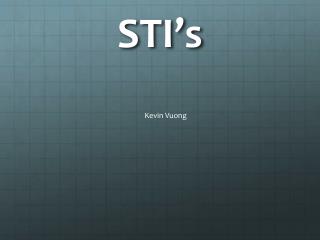 STI’s. Kevin Vuong. Chlamydia. Chlamydia is caused by the bacteria trachomatis . Even if a person has Chlamydia they may not even know since the majority of people who have Chlamydia do not show any symptoms of having it. It is the most common STI in the United States. Symptoms Discharge