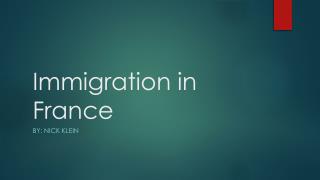 Immigration in France. BY: Nick Klein . Post World War ll. France received a large influx of immigrants during reconstruction following the Second World War The French Government was keen to incoming immigrants because there was a significant lack in labor

Immigration - . immigration. in the late 19 th century immigrants were coming to the u.s. in large numbers reasons for

Immigration - . the process of people establishing homes, and often citizenship, in a country that is not their native

Immigration - . in the late 1800's and early 1900's, millions of immigrants sailed by the statue of liberty and took to

THE COUNTRY OF France - . by: eric broadway, ii . what are france’s religion?. catholic religion in france: about 80%

France - . by rachael 5 th class. cities in france. the capital city in france is paris. marseille, lyon, toulouse and

IMMIGRANTS - . what were the reasons european immigrants had for coming to the us? to escape religious persecution