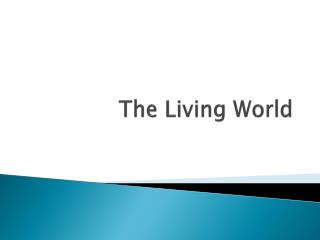 The Living World. What is the biosphere?. The biosphere is the layer around the Earth containing all living organisms. The other spheres are: Lithosphere Hydrosphere Atmosphere. Biogeochemical Cycles. Unit II The Living World - . ecology the study of organisms and how they relate to their environment (habitat).

Living World Review - . what is an community?. review. individual, population, community , ecosystem. what is an

Unit 2 ETV The Living World - . 1. which of the following is not an organism commonly found in the pond? . bull frog.

Living In the ANTI- Material World

Participating in the Living Atlas of the World - . deane kensok seth sarakaitis. workshop agenda. overview of the

The Internet. Living in a Wired World - . dangerous weapon properties are above our reason ( j.r.r.tolkien “lord of

Infographic: Oldest People Living in the World - There are many factors which comes into play when you live a long

SOCIAL MEDIA: LIVING IN THE CONNECTED WORLD - At uniworldstudios.com, we are here to help & assist you to succeed