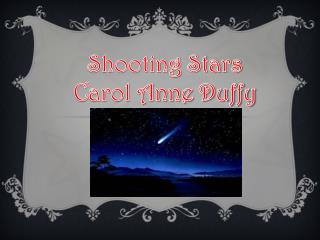 Shooting Stars Carol Anne Duffy. We are learning to:. Convey our immediate impressions of a poem To be a successful learner: I must understand “connotations” and how it applies to language . Connotations (Title). Remember : Connotations are the ideas related to certain words / concepts.

Shooting at UCLA campus - A murder-suicide killed two people at the university of california, los

Originally by Carol Ann Duffy - . daniela tabilo. originally. we came from our own country in a red room 1 which fell

Shooting Stars Carol Anne Duffy - . we are learning to:. identify and annotate the use of poetic techniques. to be a

AS Duffy Revision Notes “The Woman who shopped” Carol Ann Duffy - . summary. another surreal story, this time of a

Shooting Stars Carol Anne Duffy - . we are learning to:. identify questions for shooting stars. plan a cel for shooting

Carol Ann Duffy - Thursday 21/11/2012 aims and objectives -to contextualise the poem and poet. -to introduce the class to

War Photographer Carol Ann duffy - . “photography is the truth, if it’s being handled by a truthful person.” -don

Exploring Salome by Carol-Ann Duffy - Who was salome?

Salome – Carol Ann Duffy - . never again! i needed to clean up my act, get fitter, cut out the booze and the fags and

War Photographer by Carol Ann Duffy - . in his darkroom he is finally al o ne with spools of suffering set out in ordered