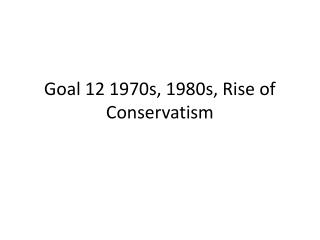 Goal 12 1970s, 1980s, Rise of Conservatism. Nixon Administration. Nixon won in 1968- moved to restore law and order in the US Greatest accomplishments were in foreign policy Worked to ease Cold War tensions with China and the Soviet Union. Appealing to Middle America. The Rise of Conservatism - . two factors pushing america to the right. disillusionment of the left government did not

L23: Contradictory Conservatism in the 1970s Discussion - . agenda objective : to evaluate the contradictions in the

Richard Nixon and the Rise of Conservatism - . kennedy -nixon: 1960 1968- richard nixon back again! vietnamization of the

Purple revolution in sweden in the 1970s and 1980s - Historiographical note(s). telling queer stories: who tells the

Conservatism - . gina, mio, clara. what is a

Principle Of Conservatism - . what is principle of conservatism

Resurgence of conservatism - . the reagan years. the road to the white house. ronald reagan took a hollywood screen test

32.2 Watergate: Nixon’s Downfall - . essential questions: what events together, are known as the watergate scandal? why

Aim/Goal: How did Napoleon restore order following the French Revolution? - Do now : the goals of the french revolution