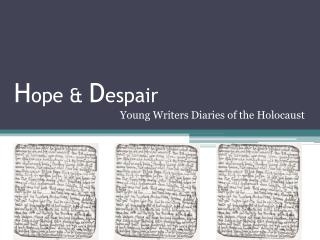 H ope & D espair. Young Writers Diaries of the Holocaust. Salvaged Pages. “These writings capture the experience of young people from the inside—not as the Nazis decreed it, not as observers witnessed it, not as historians made sense of it after events occurred.” ( Zapruder ) They wrote with: