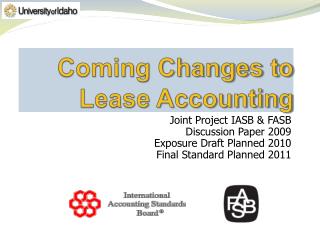 (AS 12) Accounting for Government Grants - . scope. this statement does not deal with: (i) the special problems arising The Second Coming is like… - . doctrine and covenants 45. 5 day weather forecast: www.youtube.com/watch?v=zbhw1t7bosc.

Accounting Standards - . leasing. what is a lease?. an agreement whereby the lessor conveys to the lessee in return for a