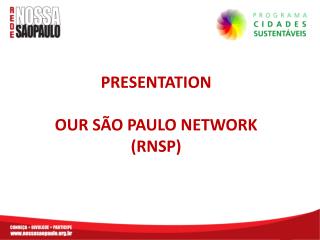 Sao Paulo #2 - . note : to appreciate this presentation [and insure that it is not a mess ], you need microsoft fonts:

Corporate Presentation - Network ... marketing has 20 years as a full time network marketing professional. ... by the

Lesson 13. Network Operating Systems (NOS) - . objectives. at the end of this presentation, you will be able to:. explain