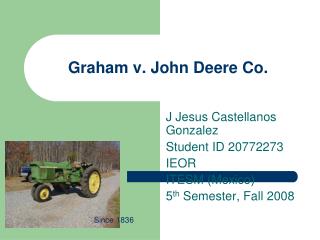 John Deere Hats - If you are a john deere fan, there’s good news for you. express your love for this iconic brand by

John Deere Balers - . by derek. john deere balers. i think people like the new balers like the 568 round balers but the

John Deere Gator 825i - . by: colman grimm. why i chose it. i chose it because we have one, and i think they are cool.

John Deere Pete P. - John deere pete p. how a poor blacksmith evolved into an a merican icon. john deere was a blacksmith