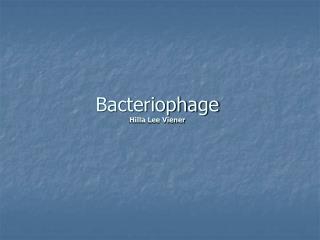 Bacteriophage Hilla Lee Viener. Bacteriophages: Definition & History. Bacteriophages are viruses that can infect and destroy bacteria. They have been referred to as bacterial parasites, with each phage type depending on a single strain of bacteria to act as host. .

Viruses, Bacteria, Protists, and Fungi Review - . what is an antibiotic?. medicine used to treat bacterial diseases. what

Who Am I? - . i am an abolitionist and operate a anti-slavery newspaper. believed in the concept of a direct relationship

Scrum without the Sugar Coating - . you want me to do what?!. introductions. panel members/roles gigi zenk– sponsor

Puritans and Quakers - . too bad we didn’t get the italian party boats!!. puritan beliefs. predestination-fate was