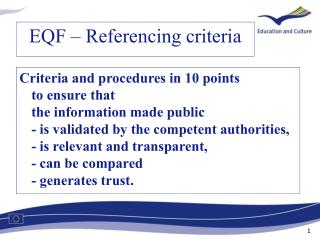 Criteria and procedures in 10 points to ensure that the information made public - is validated by the competent authorities, - is relevant and transparent, - can be compared - generates trust. EQF – Referencing criteria. Dementias - . as of 12sep07. all items from dsm-iv or apa practice guidelines unless otherwise indicated. dx criteria. q.

Criteria for Judging Abnormality - . how do we decide what qualifies as a mental disorder that needs medical treatment?

UNDERWRITING CRITERIA GENERAL INFORMATION - 1 - . name of proposer; relationship of proposer to project; is there a

2010 ACR/EULAR Classification Criteria for Rheumatoid Arthritis - . published in the september 2010 issues of a&amp;r