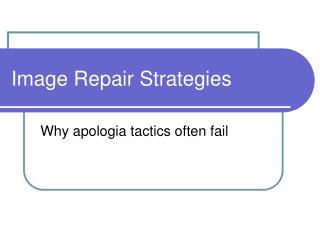 Image Repair Strategies. Why apologia tactics often fail. Simple Denial. Key Characteristic: Did not do act (or act did not occur, or act isn't harmful). Hail Damage Repair - Superior Auto Image - Hail is one of the most damaging forms of weather here in colorado. luckily,

Automobile Repair Strategies You Should Know - Do you want car repair? don't start without having studying these

{image} {image} - 1. 2. each system of differential equations is a model for two species that either compete for the same