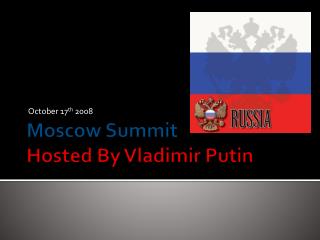 October 17 th 2008. Moscow Summit Hosted By Vladimir Putin . Purpose of Conference. To look at previous ideas on solving world issues and why they haven't worked and why issues haven't been solved. Vladimir Protasov (Moscow State University) - . primitivity of matrix families and the problem of distribution of

Hosted by: - Community foundation of the ozarks essential question #2 how do you promote planned giving in your community