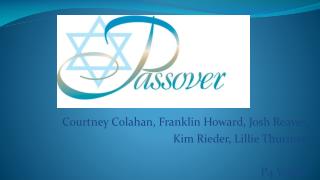 Courtney Colahan, Franklin Howard, Josh Reaves, Kim Rieder, Lillie Thurman P4 Yellow. Origin of Passover. Called Passover because God “passed over” the houses of the Jews during the tenth plague which was the death of the firstborn . Benjamin Franklin - Name one of the signers of the declaration of independence who was a printer in philadelphia,

Monitoring Using PowerShell - . josh swenson scripting@josh.com. why use powershell?. scripts can be easy, simple, and