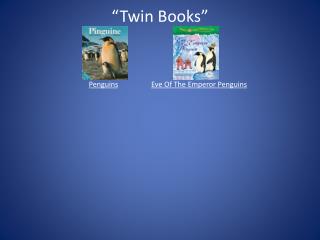 Penguins - . a non-fiction story by: jazzmon evans, and brandon morris. table of contents . habitat and

Penguins - . how’s it going?. by robby saint . what are penguins?. penguins are flightless, aquatic birds of the

A Peacock in the Land of Penguins - . organizational innovation and diversity. there once was a time, in the not so

Emperor Penguin - . by: jack beckman . habitat. emperor penguins live in antarctica. they do not have a shelter or home.

What Keeps Penguins Warm? - . most penguins live in the coldest part of our world. the average temperatures in antarctica

Penguins - By: kenney logan. penguins . the scientific name for penguins are spheniscidea . . habitat. all 17 species of

PENGUINS - . penguins are a group of aquatic flightless birds living almost exclusively in the southern hemisphere,

All About Penguins - . by alize. a humboldt penguin is a type of penguin. the fairy penguin lives in a ustralia. emperor