Thinking about the Biology of Behavior - PowerPoint PPT Presentation 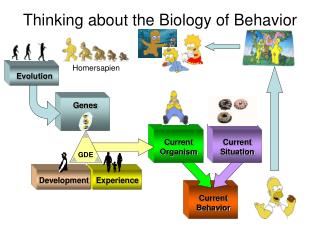 Thinking about the Biology of Behavior

Thinking about the Biology of Behavior

CHAPTER 3: Brain, Body, and Behavior - . examining the brain -- brain controls every thought, action, and feeling we

The Biology of the Mind - . neuroscience and behavior how does your brain work?. what are your neurons ?. how do they

Biological Bases of Behavior: The Brain - . introduction:. the mature brain weighs about 3 lbs and contains about 1

Biological Basis of behavior - . presented by: clinical psychologist sadaf sajjad. what we are going to learn?. how

Biological Psychology - . the nature in the nature vs. nurture conundrum . principles that define this level of analysis

Biology and Behavior - . chapter 2 part ii. a walk through the brain. the brain stem. the cerebellum. the thalamus. the

The Biological Basis of Behavior - . neurons: the messengers. neurons vary in size and shape all are specialized to

Biopsychology - . psychology 222 dr. ann voorhies. what is biopsychology?. the study of the biological basis of behavior

Intro to Biology - . the goal of science is to: investigate and understand the natural world. explain events in the