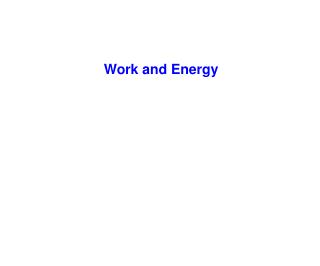 Work and Energy. Work A. Definition. In science, the word work has a different meaning than you may be familiar with. The scientific definition of work is: using a force to displace an object (when both the force and the motion of the object are in the same direction.).

Work and Energy - . chapter 5. work. work is defined in physics as the product of the magnitudes of the component of a

Work and Energy - . work. work is said to be done when an applied force, f moves an object thru a distance, d. w = f x d

13-Work and Energy - . 1-work, power, and machines work: the transfer of energy to an object by the application of force

Work and Energy - . objectives. define kinetic energy and potential energy , along with the appropriate units in each

Work and Energy (part I): - . question: how do you raise an object? answer: apply an upward force to it. the force must

Work and Energy - . work. in science, commonly used terms may have slightly different definitions from normal usage. the

Work, Energy, Power - . what’s the difference?. force is the agent of change energy is a measure of change work is a

The Work-Energy Theorem - . physics 6(a). learning objectives explain how work is done on an object describe the

Work and Energy - . i should understand and be able to apply the work-energy theorem, so i can: (1) calculate the change

Energy, Work, and Power - Unit 3. energy, work, and power. energy is the capacity for an object to do work for example,