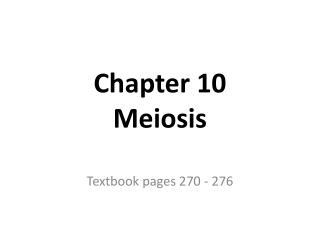 MEIOSIS Chapter 11-4 - . warm up chapter11-4. what does diploid mean? what does haploid mean? how many chromosomes does

Ch 10 Mitosis - . cell growth. limits to cell growth why do cells divide? the larger a cell gets, the more demands the

Chapter 10: Cell Reproduction Mitosis and Meiosis - . what would happen to a cell if it continued to grow?. calculate the

Meiosis: 10 th Grade - . resources. are all on the blog!. homework for monday. create a document which outlines the

Meiosis Vocabulary - . chromatin. chromosomes. all of the dna in an uncondensed (spaghetti-like) form. a double rod of