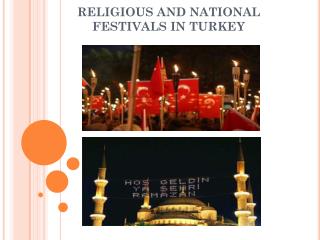 RELIGIOUS AND NATIONAL FESTIVALS IN TURKEY RELIGIOUS AND NATIONAL FESTIVALS IN TURKEY. RELIGIOUS FESTIVALS. THE FEAST OF THE SACRIFICE.

RELIGIOUS AND NATIONAL FESTIVALS IN TURKEY

welcome to our class - . unit 1 festivals around the world. teacher : chuyi. discussion. how many festivals do you know

Unit 1 Festivals around the wold - . how many festivals do you know both in china and worldwide?. warming-up. can you

Financial Accounts : Practice for Turkey National Seminar on Developing a Program for the - Implementation of the 2008

Festivals and Celebrations - . in wales!. the principal welsh festival of music and poetry is the national

Festivals - . objectives. by the end of this presentation learners will be able to know about the cultural and religious

Japanese Festivals and National Holidays - . spring is the beginning of a year. it’s so warm and comfortable season

Feasts, Fairs and Festivals - . all the fun of the fair!. what should i remember?. all year festivals…. customs and