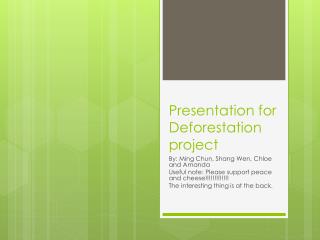 Presentation for Deforestation project. By: Ming Chun, Shang Wen, Chloe and Amanda Useful note: Please support peace and cheese!!!!!!!!!!!!! The interesting thing is at the back. Causes. Good without them. Mining. Coal mining Land is cleared for coal mining Metal mining

The Internet Radio Linking Project - . i.r.l.p. presented by the kd4raa repeater group. www.kd4raa.net. portions of this

6 th grade Sarcophagus Project - . i want my mummy!. project overview. as a group, you will be creating a sarcophagus for

Cattle Ranching, Land Use And Deforestation: - . comparative analysis of brazil, ecuador and peru. why ranching is