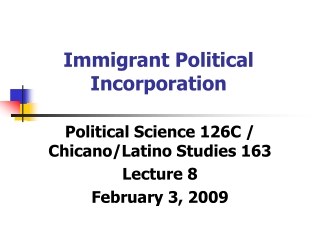 HIGHLIGHTS OF INCORPORATION OF COMPANIES, DISSOLUTION &amp; LIQUIDATION - . incorporation of a mexican company. most

Immigrant Children and Child Labor - . the immigrant experience in the early 1900s. why do people move? why did people

INCORPORATION OF COMPANIES - . chapter # 04. recap. in last lecture we have discussed company (its meaning and definition

WHAT IS… - . our objectives:. immigrant self-employment shift side businesses to primary income source increase