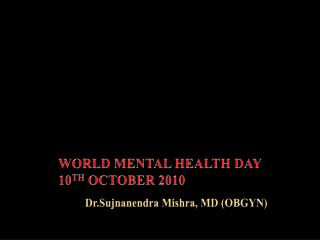 In our country plenty of legal orders interact with mental disorders in order to protect the interests of mentally ill, society and the state.These legislations are enacted to protect the society from dangerous manifestations of mental illness. There are guidelines regarding restrain, admission and discharge, procedures of civil and criminal action with regard to mentally ill. But do these laws discuss about proper care and treatment? Are there provisions for post discharge care and rehabilitation? What Are The Mental Health Problems and its symptoms? - A mental health problems is probably going to identify with the

MENTAL HEALTH in Bristol - . the economic case. mental illness is the largest single burden of disease in the uk, with

WORLD SUICIDE PREVENTION DAY - . one world connected. 10 september 2014. everyone can be a support to those who are

Topic 2-2 Your Mental Health - . in this topic, you will study the factors that affect mental health, as well as

Mental Health Awareness “ A Good Practice Guide for Managers ” - . this project has been funded by lancashire and