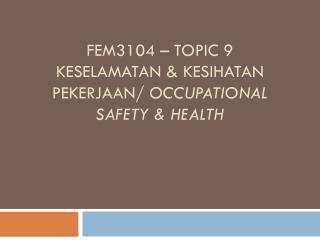 FEM3104 – TOPIC 9 KESELAMATAN & KESIHATAN PEKERJAAN/ OCCUPATIONAL SAFETY & HEALTH. INTRODUCTION. Work-related injury and disease present a serious and costly burden to all countries and a major challenge to managers, unions, governments and most especially workers themselves.

Introduction to Ergonomics - . if you have questions about this e-book or any occupational health &amp; safety issue,

Laboratory Ergonomics - If you have questions about this training series or any occupational health &amp; safety