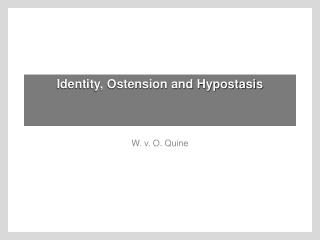 The Oneness of God - . “and you shall know the truth, and the truth shall make you free.” john 8:32. richard

Chapter 12: Adolescence - . module 5 social and personality development in adolescence. identity: asking “who am i?”.

Identity A desiderata for the Next Generation Internet - . presented by pat burke and christian loza university of north

L1 Bloc 2 Social and ethnic identity and conflict - . immigration 2 from the west i ndies and south a sia. steel pulse.