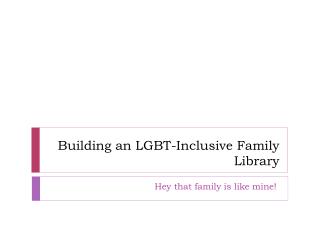 Building an LGBT-Inclusive Family Library . Hey that family is like mine! . Titles You are Familiar With?. Do your kids see themselves reflected in some of the books they read? What do you have at home for your kids? What do you read to your kids at different ages?

INCLUSIVE COMMUNITY - . “des moines will celebrate the rich diversity of our community by welcoming residents of all

LGBT people and the Law… Legislation Quiz - . 1 t he employment equality (sexual orientation) regulations 2003 are the

Building rural-inclusive businesses - . about tenet. the telecommunications and networking group (tenet) at indian