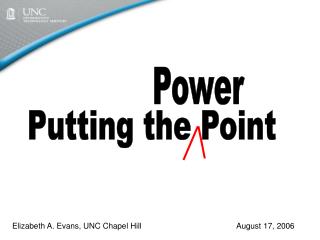 Power. Putting the Point. Elizabeth A. Evans, UNC Chapel Hill. August 17, 2006. Yuck!. PowerPoint can be a powerful tool—if used well. Unfortunately, it’s easy to create a bad presentation. The problem isn’t with PowerPoint, though. The problem is with how most of us use it. .

Punctuation II - . the question mark (?). a direct question is followed by a question mark. where did you put the sheet

TRENCHANT (TREN chunt)- Cutting, having a sharp point; sarcastic 1 - . 1. julie had a trenchant tongue and was always

HOMOGENEOUS REPRESENTATION Putting it all into a Matrix - . what we found by doing a translation and a rotation. padding

1.2 – Points, Lines, and Planes Warm – Up, Do if you finished checking homework - Find the slope of the line going

What Does T he Inverted Pyramid Principle Say? - . the inverted pyramid principle says you should put your most important

Putting things in Perspective - . or, “why bother with your natural gas engine?”. i&amp;m plan workshop july 9,

Putting the Fun in Transition: The Wonder Games - . issac beavers. history of transition for the blind students in

Putting Supply and Demand Together - . defining and moving to equilibrium. both supply and demand work equilibrium 

point is not a circle - . the point is a square with a side length 1 yocto (the yocto is the smallest unit of measurement