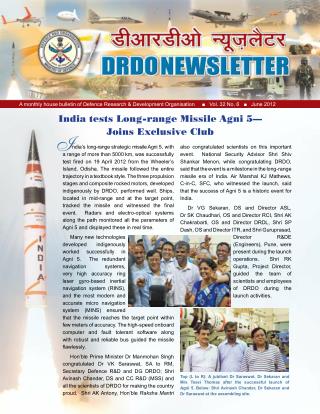 We are on a mission to help institutions that are already helping the needy and neglected. Mission Agni Foundation.

BALLISTIC MISSILE DEFENSE - . how big is the threat?. bush’s promise. 2000- campaign pledge to deploy an effective

BALLISTIC MISSILE DEFENSE - . how big is the threat?. bush’s promise. 2000- campaign pledge to deploy an effective

The Science, Technology, and Politics of Ballistic Missile Defense - . philip e. coyle at the aps/gwu short course on

Agni - An Indian Restaurant In Annangrove - Indian food is popular all over the world. there are nearly 400 indian

Nuclear weapons: Who has how many - The world, they say, is becoming a more dangerous place by the minute. with the

Shree Ganesh Agro Industries - Shree ganesh agro company is one of the best dealers, suppliers, and manufacturers of Dr. Prem Reddy committed more than $60 million to the Medical school - The california university of science and medicine,