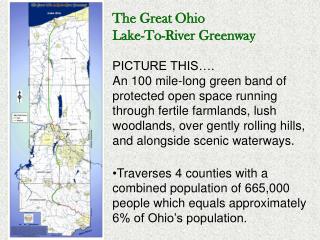 The Great Ohio Lake-To-River Greenway. PICTURE THIS…. An 100 mile-long green band of protected open space running through fertile farmlands, lush woodlands, over gently rolling hills, and alongside scenic waterways. Traverses 4 counties with a combined population of 665,000 The Ohio River - . created by ms. gates, 2010. the ohio river. standard : students will identify the mississippi,

Ohio the great - . jake cox and angelina morrow. if you were to go to ohio this is the state bird you would see….

The Ohio River Basin Alliance - . who we are and where we’re going martin hettel, steering committee member. what is

THE GREAT RIVER CIVILIZATIONS - . mesopotamia – region of the middle east that is between the tigris and euphrates

The Ohio &amp; Lake Erie Regional Rail - Ohio Hub - . passenger rail: how can we fulfill its economic promise for our

Lake and River Ice - . source: city of prince george. lake and river ice. an obvious and notable feature of lakes and

Over the River, Through the woods, to Great-Great-Great-Grandma’s We Go! - . val swift, gisp gis administrator hamilton

AC Repair Avon Lake Ohio - Air conditioning units don’t break down when you are ready for them to. they usually break