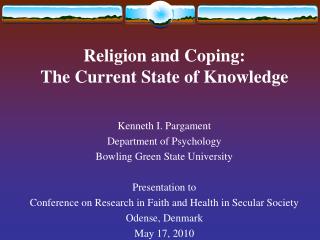 Religion and Coping: The Current State of Knowledge Religion and Coping: The Current State of Knowledge. Kenneth I. Pargament Department of Psychology Bowling Green State University Presentation to Conference on Research in Faith and Health in Secular Society Odense, Denmark May 17, 2010. Coping with 9/11. Schuster et al. (2001)

Religion and Coping: The Current State of Knowledge

Gender, Religion and the State in Iran - . international perspectives on gender week 14. structure of lecture.

Honeycomb and the current state of Honeypot Technology - . christian kreibich. coming up. introduction to honeypots

Importance of Religion by State - . 80 % of evangelicals are interested in what the bible says about animals 83% of

&quot; the current state of knowledge Of Muslims And the role of “Muslim Teachers &quot; - . seminar on role of

Religion, Science and the Current Ecological Crisis - . genesis. god creates the universe in six days. creation of man in