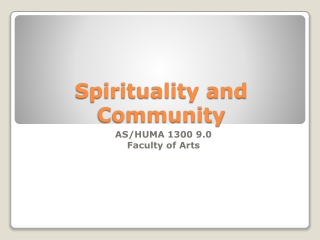 Spirituality, Religion, and the Supernatural - . part i. what are religion and spirituality?. religion is an organized

SPIRITUALITY , SPIRITUAL CARE AND THE NEEDS OF THOSE WITH AUTISTIC SPECTRUM CONDITIONS - . chris barber and peter kevern.

What is Vincentian Spirituality? - . “ no work of charity is foreign to the society ”. what is vincentian

Spirituality in Healthcare, Social C are , and Education - . paul dearey centre for spirituality studies university of

Spirituality and Healing - . what is spirituality?. a sense of presence higher than human. “healing is a work of

Spirituality and Work - . a reflective dialogue with barbara gallagher jarry and john knuerr. 10.12.07. goals. to provide